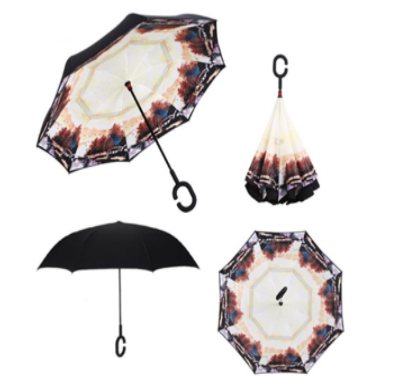 The umbrella has become one of the paraphernalia of everyday life, whether it is raining or sun-baked. Reverse umbrellas have made many people curious. What exactly is the difference between a reverse umbrella and an ordinary umbrella? Let's find out together.

What is a reverse umbrella?

Thankfully, some creative people have come up with the idea of reversing the closing action of an umbrella. The reverse umbrella, or invert umbrella, is the pinnacle of this design variation.

Benefits of the Reverse Inverted Umbrella

Easy to open and close in crowds

Instead of opening upward into people's faces, the inverted umbrella opens downward into the heads of those around you. Simply lift it over your head and open it to avoid the embarrassment of running into other people in the rain. This aspect of the Reverse Umbrella makes it a safer option, especially if you live in a city or are often in crowded areas.

Open and close in the minimum space

When you get in and out of the car on a rainy day, you can open and close the umbrella with minimum space to reduce the degree of wetness.

In order to increase the sturdiness of the umbrella, the structure of the umbrella bone is also designed in a special lotus style, making the wind resistance even better! In addition, the umbrella pole is a rare hexagonal shape, and the choice of electric iron as the material, so the sturdiness does not matter, but also not easy to suffer from the ruthless rust of the years. Because the umbrella uses double spokes, even if the wind blows it over, there is no need to worry, as the button located on the handle can restore it to its original shape when it opens.

We are a reverse inverted umbrella supplier, please feel free to contact us if you are interested in it.

NEXT: Everything You Need To Know About Neoprene Gloves